Some years ago I read an article in Classic Boat about a sailing festival/Regatta in the Golfe du Morbihan on the southern coast of Brittany. The Golfe is in effect an inland sea where the tide gets trapped and is dotted with islands and small harbours. The event is held every two years, this year it is from Monday 27th May and finishes on the Sunday the 2nd of June. Basically boats of all shapes and sizes with skippers and crew of all shapes and sizes (from all over Europe) converge on the Golfe and are placed in various classes which are based in the ports and villages dotted around the bay with larger boats based in the port of Vannes. The tide race can be very strong at times, so skill and judgement is required when one least expects it. ! The plan is that the various flotillas set off in the morning and sail somewhere for lunch and in the afternoon sail on somewhere else for dinner. 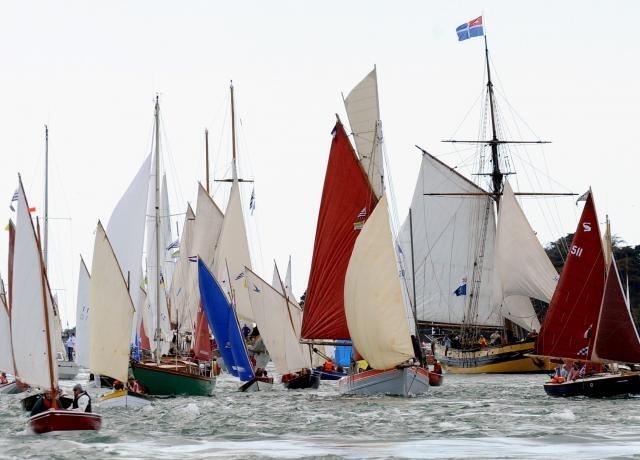 So in 2017 having registered on the website some months before, with excited anticipation I, my son Ben and friend Steve set off via Brittany Ferries (special discount for car and boat attending the SdeG) and motored down to Arradon where our flotilla was based. We checked in to the campsite and got Romilly in the water with the assistance of a Frenchman called Jean-Paul who we met on the quay and exemplified the camaraderie of this Breton event. Jean Paul was a gregarious man with a little wooden boat held together by string and we bumped in to him continuously throughout the event. Inevitably he was wearing budgie smugglers and would hail us with great enthusiasm to our great merriment! His enthusiasm helped us to get the mast up relatively easily and to guide us to a mooring.

So a typical day sees the sailors meeting outside the port office for a briefing. This is an interesting event as the briefing is in French and when it ends it generally transpires that confusion reigns. There was much Gallic shrugging of shoulders so the inevitable result was that everyone hoped the chap in front knew the course to where we were headed. If one likes “boat porn” this is the place to be. There are some beautiful vessels of all shapes and sizes and others (like Jean-Pauls) which have seen better days and have lingered at the bottom of the garden since the last event, been quickly put back together, popped on top of a car or on a trailer and driven one imagines at great speed across France so that fun can be enjoyed by all!

The first day we sailed to an island and anchored off at lunchtime. Registered crew have special tags which entitles the bearers to free Vin, Cidre and oysters each day, to the great delight of all! Essential to remember to always carry the tags with you. On shore a party was in full swing, ferry boat transfers were in place and a folk band was playing. In the afternoon the flotilla sailed to a village on the mainland but as we were unsure how we would get back to Arradon we ducked out and did our own thing. We discovered later that we made the right decision as transport back was best achieved by sticking a thumb out. The bus which was laid on did not seem to materialise or communication was intermittent as to the precise plan for transport. We were now getting in to the event way of life. In short if there was the odd cock up. Did it really matter? No it didn’t, it added to the general sense of adventure, generated camaraderie/humour and was to be expected.

The villages all put on a special fete for the participants and there is a fun carnival atmosphere. In the evening a three course meal is provided in a marquee for not a lot of euros in typical French style. This meant of course the next day quite a few of us had to meet with the flotilla again as boats were left overnight at the stop over. A bus was laid on for those that needed to return to their vessels.

So the week continued in that vein. New friends were made, boats were admired the Breton Cidre was delicious, the Oysters were delicious and the weather was glorious. All in all a glorious week.

There were three Romillys at the last event, it would be good to get a few more along. Flotilla 7 is based in Arradon. So go on hook up your Romilly and come along.

Commenting is closed for this article.